If you’ve been following us on Instagram, you know that I’ve tried making a German pancake that unfortunately turned out like a gigantic, burnt popover. #fail But that didn’t stop me from trying again! I used The Kitchen Paper’s fail-proof recipe and finally, FINALLY did it right. And just in time for outside spring brunching. Bring on the skillets and mimosas…

Toppings of your choice:

Preheat the oven to 450 F. Place a pie dish, or cast iron skillet, in the oven to heat. By hand, or in the blender, combine the eggs, vanilla, salt, and milk. Blend for a few seconds, until smooth. Add the flour, and mix only until incorporated. With the pan still in the oven, put the butter into the pan. When the butter has melted, remove the pan and gently pour that batter into the center of the pan. Return the pan to the oven, and bake for 15-20 minutes, or until puffed and golden.

Serve with syrup, powdered sugar and lemon, sour cream and brown sugar, or whatever else suits your fancy!

I had pho for the first time in Philly last month. (Which I later learned is pronounced “fuh”. So now do you get the title?!) Anyway, moving on…my god it was amazing! Spicy, and savory, and filling. But not like “food baby” filling. It was so perfect I had to try to recreate it. Plus, it’s having a real moment, so naturally we want to give you a damn delish recipe for it. Have at it readers!

Prepare the rice noodles according to the box.  While the noodles are cooking, peel and slice the ginger and thin slice the onion. Remove the stems from the shiitake mushrooms and quarter the tops. Heat a large pot over high heat and add the ginger and onion for a few minutes. (Keep an eye on them to ensure they don’t burn.) Once fragrant, add in the chicken broth, cinnamon stick, fish sauce and shredded chicken. Top with salt and pepper to taste. Turn down the heat to medium and let the ingredients simmer. Add in the rice noodles.

To prepare the toppings, seed the jalapeno and thin slice. Pour the pho into bowls and top with a few jalapeno slices and fresh cilantro. Season with Sriracha for an extra kick. 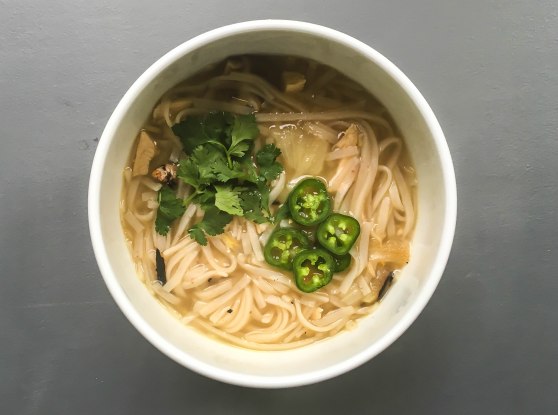 This is for the people like my sister that never really want to cook food and are 100% ok with just “preparing food”. Luckily, this quick and yummy week night fix requires no actual cooking. Simply assemble and bake. I got the idea from an appetizer at one of my favorite fusion Indian spots. Hope you guys dig it as much as I do. It’s ridiculous easy and tasty, what’s not to love about Naan Pizza.

Smear a tablespoon or two (depends on how saucy you want your “pizza” to be, I do 2 myself) on to the slice of naan then take a fistful of spinach and layer on with the cheese and shredded chicken. Bake for 10-12 minutes at 350 degrees or until the cheese melts and everything is warmed through. You can cut up and serve as an appetizer or have it as dinner with wine at about a naan piece per person. Package has four naan pieces usually and that’s generally enough for the chicken, spinach, curry, and cheese to cover.

Ever since I got back from Portugal I’ve been in an international state of mind. It’s still pretty cold in Philly and I wanted something hot and sweet. I decided to toy with the idea of making a rice pudding and found a Mexican recipe for arroz con leche. Luckily, I had most of the ingredients in my fridge and although it was a lengthy cooking time, it was very easy to make. Also its funny how many cultures eat similar variations of rice pudding – North Indians make a twist on this called Kheer with cardamom. (Had to toss that tip out there since Jess is obsessed with cardamom these days, did you try her cookies?)

Put the water, rice, and cinnamon in a medium-size heavy saucepan set over medium-high heat. Bring to a boil, uncovered, and cook until the rice is tender, about 18 minutes. Strain out the excess liquid and reserve the rice. Return the rice to the saucepan. Stir in the evaporated milk, condensed milk, and whole milk (Along with the extracts I added to the original recipe, this is also where you could add the cardamom seeds-remove from pods) . Continue cooking over medium-high heat until the mixture comes to a boil. Reduce the heat to low and cook, uncovered, stirring constantly, until the mixture is thick, about 20 minutes. Add the raisins & almonds and stir well. Transfer the pudding to a serving bowl. Dust the top of the pudding with ground cinnamon to look pretty and serve!

FYI: this recipe is GLUTEN-free, Vegetarian, and serves 4-5 people.

Our Most Delish Pages