Ok so this idea is kind of a culmination of a few things. Not the idea of stuffing your face, the idea of this stuffed veggies recipe. Anyway, get amped guys. This is just a peak into the method behind the madness of this fun lil blog here. I realized that we try to always provide recipes that use and reuse ingredients. We want there to be enough overlap that when you are spending money on something, its being used to its full value. However, I can’t say that’s been true for the mirepoix mix that I reference in my turkey meatloaf recipe. So I got to thinking on what else I use that with. Not that you need a specific recipe because its something so multi faceted that it can be thrown in a frittata, it can be used as a starter to soups and stews (says the label on the packaging. ha so ya I felt like a fraud, saying hey guys just throw it in anywhere). Then, I ate this delicious stuffed zucchini the other day from this Italian deli I frequent (shout out to Tredici’s). They made the marinara fresh and it was stuffed with hot sausage. I was in love. All I had to do now was to find a way to make it easy & healthy (I mean some of us are still sticking to 2014 resolutions). Anyway, let’s get right to it. Oh and don’t be scared of the long list of ingredients, this dish isn’t complex, there are just layers to its yumminess.

Preheat the oven to 400 degrees F. Spray 2 heavy baking sheets with vegetable oil cooking spray. For the vegetables: Using a melon baller (or spoon since I have no such melon baller in my kitchen) remove the flesh from the zucchini, leaving a 1/2-inch border around the edges. Reserve the flesh. Place the  zucchini and peppers, hollowed-out sides up, on the prepared baking sheets. Season with the salt and pepper. For the filling: Place the zucchini flesh in a food processor. Add the garlic, mirepoix, chili flakes, oregano, salt and pepper. Blend until all the vegetables are finely chopped/mixed. In a medium nonstick skillet, heat the oil over high heat. Add the blended vegetable mixture and cook, stirring occasionally, for 5 minutes. Add the wine and cook until all the liquid has evaporated, about 5 minutes. Set aside to cool. (make sure to taste the mixture before blending in the meat, make sure there is enough flavor & its seasoned enough). In a medium bowl, combine the cooked vegetables, turkey, egg, 1 cup Parmesan and the breadcrumbs. Mix the ingredients until well combined. Spoon the filling into the hollowed-out vegetables. Sprinkle the remaining 1/2 cup Parmesan on top of the filling. (I also did some shredded cheddar because more cheese is never a bad thing). Drizzle with olive oil and bake until the vegetables are tender and the tops are golden brown, 45 minutes. Transfer the vegetables to a platter and serve. You can accompany with marinara from the call it what you will recipe. 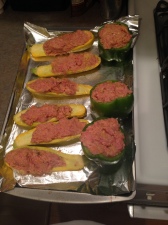 *I was out of zucchini & did it with squash, stick with zucchini though because you will get more “flesh” from the center to mix with the meat. I would also chop up the tops of the peppers and blend with the other veggie mixture. It makes the stuffing less meaty and more flavorful*

Here's What I Think Cancel reply

Our Most Delish Pages